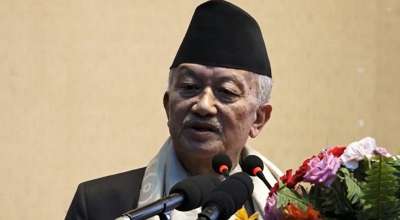 Janakpur/ President of India Pranab Mukherjee, who is presently on a three-day state visit to Nepal, performed special pooja at the Janaki temple here today.

On this special occasion, he also offered pooja at other idols of gods and goddess at the Temple premises. On the occasion, main priest (Mahanta) Ram Tapeshwar had welcomed president Mukherjee as per the vedic and Maithil culture.
Similarly, Deputy Prime Minister and Home Minister Bimalendra Nidhi had welcomed and received the President upon arrival at the Janakpur airport as he had flown to Janakpur on an aircraft of Buddha Airlines.
Locals and students had welcomed President Mukherjee by waving hands when he was on the way to Tirhutiya Gachhi, where he is to be offered a civic felicitation, from Janakpur Airport.
The temple is famous for its own unique model of Rajput architecture in Nepal. It is built at an area of 4860 sq feet. The three-storied temple has 50 meters height. RSS