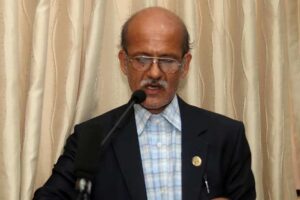 Charikot : Two women have planned to scale the world’s highest mountain peak Mount Everest with the objective of making the misconception regarding the birthplace of Gautam Budhha clear.
Chhoki Sherpa of Simigaun of Gaurishankar Rural Municipality-9, Dolakha and Sharmila Tamang, of Rosi Rural Municipality-11, Kavrepalanchowk are on the mission of climbing the world’s highest peak measuring 8,848 meters with the message that Buddha was born in Nepal.
The Pioneer Adventure Pvt Ltd is facilitating their expedition to the Mt Everest commencing from April 8 this year. They will carry a flag bearing the message that Buddha was born in Nepal to the Everest and will play a song titled ‘Budhha was born in Nepal’ by Dhiraj Rai on the atop, giving a message from the top of the world that Buddha was born in Nepal not in India, said Chhoki at a press meet here today.
Chhoki who had earlier spent four years in South Korea in connection with foreign employment was wondered to meet the Buddhists who believed that Buddha was born in India. Her same bitter experience prompted her to send the real information about the birthplace of Buddha to the world from the Everest. According to her, South Korea’s school text books mention that Buddha was born in India and the South Koreans have internalised this wrong belief.
They have appealed to all Nepalis at home and abroad for moral and financial support to make their journey successful.