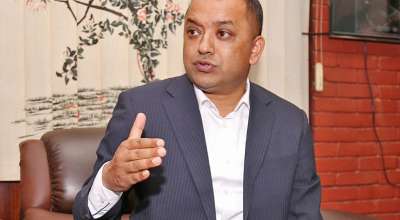 At an interaction programme on Thursday in the capital city, Ghising said that the NEA is working to end the problem of frequent power disruption adding that regular power supply would be ensured. “Even at present, frequent power disruption is reported in President House and Prime Minister’s official residence and Singhadurbar. Now, we are working to supply electricity regularly in those areas,” he added.
Ghising was of the argument that the NEA was effortful for making electricity supply more reliable and qualitative. Saying that underground transmission line would be made by replacing the wooden poles and naked wires in the major city areas in the offing, Ghising claimed that our status would be lifted to export electricity in some years by expanding the hydropower projects in the country.
Likewise, Member of the National Planning Commission Dr Krishna Prasad Oli said that foreign direct investment (FDI) would be brought in for the development of additional hydropower projects by amending to the existing Acts, laws.