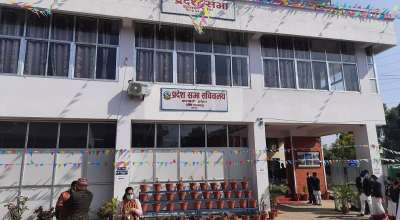 7 Magh, Kathmandu: The coalition government has carried out many development activities in hydropower and irrigation sectors, claimed Prime Minister Sher Bahadur Deuba in his address to the nation on Friday. For instances, the government has provided free electricity to the consumers who have consumed less than 20 units a month, benefitting around 2.5 million consumers. Similarly, electricity tariffs used for irrigation have been slashed 50 percent to Rs 2 per unit. This facility means to make the country self-reliant on agriculture, said the PM.

The government aims to link 1,300 megawatts electricity to the national grid in the current fiscal year, 2078/79. Fifty percent of the target has been achieved in six months since the coalition government was formed. During the period, the Upper Tamakoshi hydropower project of 456 megawatt has come into full-operation. Similarly, the Mistri Khola of 42 megawatts and Likhu Khola hydropower project of 52 megawatts- both with private sector investments have been linked to the national grid.

Construction of 132 KV Solu corridor has been completed. Also, 39 megawatts electricity from two projects in Nuwakot district has been exported to neighbouring India since three months back. Efforts were on to export additional around 500 megawatts power to India in the next winter season, said the Ministry of Energy, Water Resources and Irrigation. Construction of national pride projects including Sunkoshi-Marine diversion, Bheri Babai multipurpose project and Kathmandu-Tarai-Madhes fast-track has been expedited, said the PM.