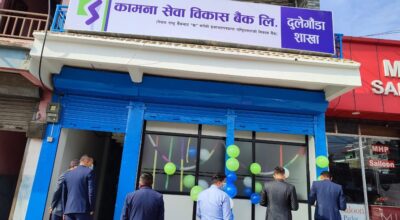 16 Mansir, Kathmandu: Minister for Law, Justice and Parliamentary Affairs and Nepali Congress leader Dilendra Prasad Badu has said time has come for the NC to shoulder responsibility to save the country’s constitution, nationality and democracy. Only NC can shoulder the responsibility of saving constitution, he claimed at the inaugural function of party’s province convention here Thursday.

The ceremony was virtually inaugurated by party president and Prime Minister Sher Bahadur Deuba. “At present, the NC is facing many challenges and it is ready to resolve them. There is no constitutional provision to go for a fresh mandate without completing the five-year-term of the House of Representatives. So it requires elections only after five years,” said Badu who is also the leader of the NC. Now, the NC leading the incumbent government has its responsibility to organise next elections, which he said would be reached through ongoing NC general convention, according to him. Moreover, Badu viewed the people have expected the NC to accommodate all people and representatives from wider sectors.