Kathmandu : Nepali Congress will be hosting a tea reception on October 5 in continuation of its annual event to mark the festive season.

NC Central Office’s Chief Secretary, Krishna Prasad Poudel, said the annual reception held to mark the Bada Dashain, Tihar and Chath will take place on the day of Kojagrat Purnima for an exchange of greetings from 1 pm to 4 pm.

Poudel added that heads of the political parties, representatives, chiefs of diplomatic missions and representatives have been in invited to take part in the reception.

Congress is giving continuation to the event started by its founding leader and first elected Prime Minister, BP Koirala, in 2033 BS after embracing the ideology of national reconciliation and to provide an opportunity for all Nepali people to take part in nation building and to strengthen mutual harmony and nationality.

The party did not hold a tea reception last year due to the death of NC’s the then President and PM, Sushil Koirala. 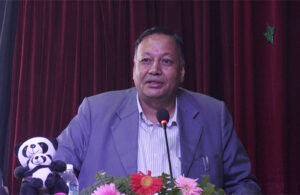